For hockey fans ready to settle into one of the best on-paper matchups in Stanley Cup Final history, the Tampa Bay Lightning’s Game 3 victory was the kind of counterpunch that could help this series live up to its immense billing. Tampa Bay badly needed to change the mood of the series after falling behind 0-2, with its Game 2 loss Saturday tying for the second-most lopsided in any finals game ever. That’s exactly what happened Monday, as the Lightning held serve at home (their eighth straight home win this postseason)1 and threw the Avalanche into some disarray of their own. Ahead of Game 4 tonight in Tampa, the series is right there for either team’s taking, if they stick to the keys that have worked in their best moments from the series so far.

One huge difference for Tampa Bay in Game 3 was its energy level early on. The Lightning had been outscored 6-1 (and outshot 26-13) in the first periods of Games 1 and 2, but they survived Colorado’s early onslaught — thanks in part to a disallowed goal — to hold a 2-1 lead after one period, then put the game away with a flurry of goals in the second frame. Avoiding a flat start is crucial for a Tampa team that is 7-1 in the postseason this year (and 25-3 over the past three playoffs) when leading after a period, but only 1-5 this season (and 3-12 since 2020) when trailing. For a team with a reputation as a high-scoring offensive machine, the Lightning’s defense remains at the heart of their dynasty, and they operate best when grabbing an early lead and grinding away an opponent’s hope of coming back.

A huge part of that operation is also Tampa Bay’s usually impenetrable wall in net, Andrei Vasilevskiy. It was shocking to see the NHL’s best goalie from the past five seasons (according to adjusted goals above replacement)2 look so mortal early in this series, with just an .838 save percentage through two games — including allowing all seven goals Colorado poured on in Game 2.3 But Vasilevskiy clamped down and stopped 94.9 percent of the Avs’ shots in Game 3, with saves on all but one of Colorado’s eight high-danger shots, per Natural Stat Trick’s data. When he plays like his usual Hall of Fame self, the Lightning are extremely difficult to beat.

And it should be noted that the Lightning offense bounced back strong in Game 3 after an ugly no-show in Game 2. According to ESPN’s Stats and Information Group, it was only the sixth time in finals history that a team scored at least six goals in a game immediately after being shut out, as Tampa Bay was in Game 2. More Lightning skaters notched points in Game 3 (10) than had done so in the series overall through two games (nine). This included regular-season scoring leader Steven Stamkos getting on the board with a goal and an assist after being held pointless in Games 1 and 2, a good omen for the Lightning going forward. (Another good omen: Head coach Jon Cooper thinks Nikita Kucherov should be able to play Game 4 after leaving the ice early Monday night.) Overall, Tampa Bay’s return to form in Game 3 may have saved its chances of winning a third-straight Stanley Cup.

But despite all that, Colorado shouldn’t be too worried yet. Our forecast model still gives the Avalanche a 75 percent chance to win the Cup, since they are the higher-rated team and have home-ice advantage. Furthermore, they have been dominating most of the series so far. According to Natural Stat Trick, Colorado has the edge in practically every measure for controlling the flow of play at 5-on-54 in the final. Not only was that clearly true during Games 1 and 2 in Denver, where the Avalanche generated a whopping 66 percent of the scoring chances and 73 percent of the expected goals, but it was even true on the road in Game 3: Despite the loss (and despite the brewing goalie controversy between starter Darcy Kuemper and backup Pavel Francouz), Colorado had a greater share of scoring chances and slightly more expected goals at 5-on-5 than Tampa Bay after adjusting for score effects.

That doesn’t mean Tampa Bay didn’t deserve to win, or that it didn’t do many more things right in Game 3 than it had in Games 1 and 2. But it does mean that the Lightning’s margin for error continues to be smaller than we might expect for a two-time defending champ. To win a third consecutive Cup, the Bolts need to execute their early game plan and stonewall Colorado with Vasilevskiy’s dominance in net. But as we’ve seen often in this series already, the Avalanche’s speed, talent and depth can quickly throw off that formula and overwhelm even a team as decorated and experienced as the Lightning. 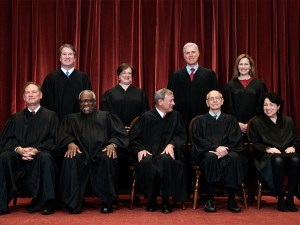 
Just How Sharp Was The Supreme Court’s Rightward Turn This Term?