Like most dynastic teams, the Tampa Bay Lightning weren’t used to failing in important games. As they won two straight Stanley Cups and reached the doorstep of a third, the Bolts racked up a 44-18 record in the playoffs — rarely facing elimination, though always answering the call when they needed to. But for the first time in years, the Lightning met their match in the form of the Colorado Avalanche. Colorado won the Stanley Cup Sunday night by finishing off the two-time defending champs, owning a titanic championship showdown that was tightly contested but ultimately belonged to the better team. And now that one special run has been put on hold, it’s natural to wonder whether the young and talented Avalanche just began a new one of their own.

Colorado’s performance this postseason was dominant. The Avs finished the playoffs with a 16-4 record, a goals-per-game differential of plus-1.5 and an Elo rating of 1631, all of which rank among the best dozen or so among Stanley Cup winners in modern NHL history:1

As impressive as the Avalanche’s overall resume was, the fact that they beat Tampa Bay of all teams in the final makes this championship stand out even more. Including the Lightning in 2020 and 2021, only 17 teams in the NHL era had ever won two or more Cups back-to-back. Of those, only nine had their runs ended by the team that eventually won the Cup for itself — and of those, only five title streaks ended in the Stanley Cup final. Changing-of-the-guard types of victories like this don’t come along very often, but by the end of the series there was no doubt Colorado had earned its championship.

The Avalanche did it with a complete effort in every phase of the game. Throughout the season, we marveled at Colorado’s scoring firepower, as led by center Nathan MacKinnon, defenseman Cale Makar and an incredibly deep supporting cast of offensive talent. And that was on display in the playoffs, with the Avalanche producing the most goals per game (4.25) by a Cup winner since 1988, and the ninth-most since 1927. They also converted on a sizzling 32.8 percent of their power plays in the playoffs (including a 37.5 percent clip against Tampa). Meanwhile, Makar won the Conn Smythe Trophy as playoff MVP in large part because he had the fourth-most points ever in a postseason by a defenseman.

But Colorado also showcased its defense when it needed to. After grabbing a 2-1 lead over Tampa Bay in the second period of Game 6, the Avalanche denied the Lightning much of a chance at the equalizer — they held the Lightning to just four shots in the final frame, suffocating them down the stretch in a scene right out of Tampa’s usual script. A number of Tampa Bay’s usual offensive stars were frustrated in Game 6 — Victor Hedman, Nikita Kucherov and Alex Killorn were held pointless — and that was emblematic of the series as a whole. Even sometimes-maligned Colorado goalie Darcy Kuemper was sharp in the clincher, stopping 22 of 23 Lightning shots Sunday night.

This could also be just the beginning for Colorado, whose best players are mostly under age 30 — and whose roster was the 12th-youngest in hockey during the regular season, as weighted by adjusted goals above replacement.2 General manager Joe Sakic did a masterful job of rebuilding this team from scratch, drafting a ton of homegrown talent and complementing it with savvy external acquisitions to create a dominating hockey machine. While the Avs will have a few choices to make and gaps to fill in free agency, much of their core will return for another crack at the Cup next season … and beyond. 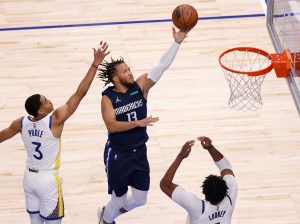 
The Hawks, T-Wolves And Knicks Made Moves With Clear Upsides — And Downsides

Of course, Colorado still has a long way to go before joining Tampa Bay in the dynasty conversation. But the Avalanche’s Stanley Cup victory Sunday was the hard-fought exclamation point on one of the more impressive playoff runs we’ve seen in a long time. The Lightning were the opponent that hadn’t lost in so long, it seemed like they might be unbeatable. But in the end, Colorado was the team simply too good to be denied.