The Florida Panthers are going all-in this season as they have an elite hockey club and feel they are true contenders for the Stanley Cup. Management is committed to upgrading their roster for the playoff push and trade talks have included top prospects and high draft picks along with current roster players. Forward Frank Vatrano is one of the players involved in talks and could be on his way out of the sunshine state.

Vatrano is a 27-year-old undrafted winger who is a pending free agent making $2.53 million on the cap. So far this season he’s recorded 14 points in 40 games and perhaps management would like to use him as a chip to upgrade on defense.

The Massachusetts native has spent the past five seasons with the Panthers and has enjoyed breakout success after being only a depth option for the Boston Bruins. He’s enjoyed seasons that include scoring 24 goals so there should definitely be a trade market for his services. 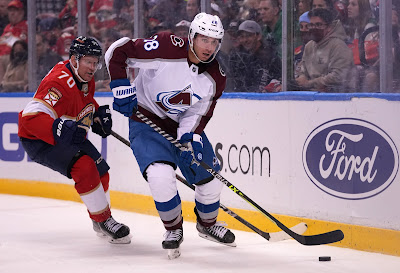 A potential deal with the Colorado Avalanche makes sense as two teams from different conferences who may be able to fill their needs with each other’s players. The Avs are trying to find a right-handed shot forward to add to their mix, meanwhile the Panthers want some more depth on defense. Ryan Murray is a name that’s been linked to the Panthers in the past so perhaps we see both executives circle back on a potential deal.