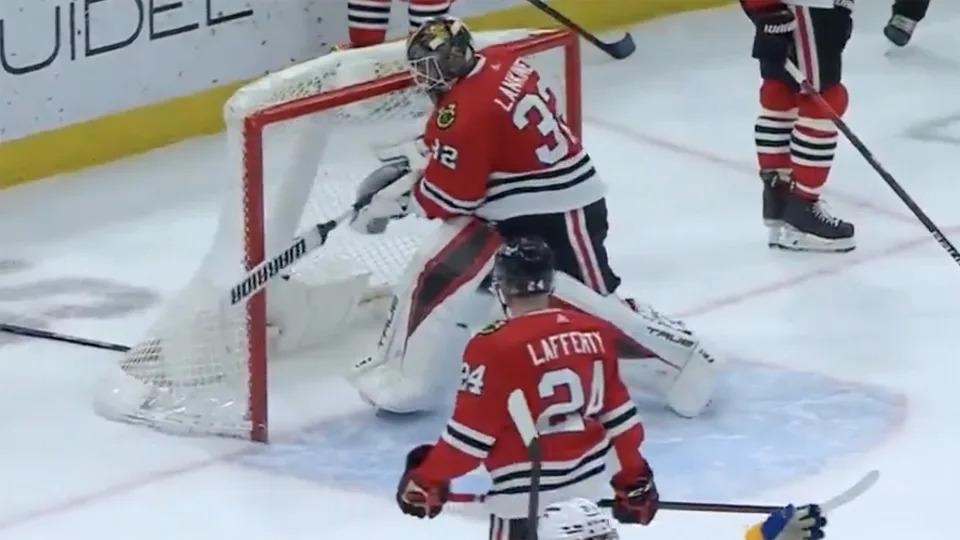 The Blackhawks lost in humiliating fashion thanks to a ridiculously bad goal in the dying seconds of the game.
The Buffalo Sabres were able to walk away with a 6-5 win over the Chicago Blackhawks on Monday thanks to a very odd goal with just 12 seconds remaining in the third period.
The Blackhawks actually appeared to catch a break, as Tage Thompson broke his stick on a one-timer attempt as the clock trickled down. However, the puck ended up bouncing off the end boards and into the crease, where out-of-position Chicago goalie Kevin Lankinen then put it into his own net.

This goal perfectly sums up the Blackhawks’ 2021-22 season, as almost nothing has gone right for them. It was a tough night all around for Lankinen, as he allowed six goals on 37 shots. His frustration after giving up the ugly late goal was on full display, as he slammed his stick into the post numerous times.

Making matters even worse was that the Blackhawks were in full control of the game, leading 4-0 early in the second period. However, the Sabres scored three unanswered to close out the second, before adding another three in the third to complete the miraculous comeback.

With the loss, Lankinen fell to 4-9-5 on the season and now owns an ugly 3.63 goals-against average along with a .886 save percentage. Those numbers are extremely disappointing given the promise he showed as a rookie just a season ago.

The Blackhawks have won just 24 of 67 games this season, and sit seventh in the Central Division. They will likely make a number of changes this offseason as a result of their struggles, and one may be moving on from Lankinen.

Things haven’t been any better for the Sabres, as they too have just 24 wins on the year. Monday night, however, was a big road win, and provided glimpses of what they could become in a few years.

Don’t forget about their horrible game in Vegas “The Sieve”

Blackhawks lose 5-4 to Vegas in OT

The Golden Knights trailed 3-0 entering the third but got goals from Chandler Stephenson, William Karlsson, Jack Eichel, and Alex Pietrangelo.

Dadonov then scored for the second time in two games since returning to Vegas’ roster after the NHL negated a trade that sent him to Anaheim because of his no-trade clause.

It was Vegas’ first ever victory in 58 games when trailing by at least three goals in the third period. The Golden Knights had been shut out in eight of their previous 11 periods heading into the third.

The game marked the return of two-time Stanley Cup champion Alec Martinez for Vegas. He suffered a severe facial laceration on Nov. 11. The 34-year-old missed 53 games.

Kubalik got credit for the first goal even though it was an inadvertent redirect off Vegas defenseman Shea Theodore’s stick that sent the puck into the net. Jake McCabe sent a pass to Kubalik, who blasted a shot from the blue line that deflected off Theodore’s blade and through Thompson’s legs.

Chicago extended the lead late in the second period when it capitalized on a turnover by defenseman Zach Whitecloud, who failed on a clearing attempt. DeBrincat found a perfect lane to the backdoor, where Toews was waiting for the tap in to make it 2-0.

With time draining in the second period, Caleb Jones fired a shot from between the top of the circles. When Thompson’s kick save delivered the puck to the left dot, Strome one-timed it perfectly to give Chicago a three-goal lead.

With playoff hopes on the line, Vegas came out of the locker room playing with a sense of urgency, scoring three goals within 2:52 early in the third period. Stephenson and Karlsson sent pucks into the net within a minute of each other, while Eichel added the equalizer shortly thereafter.

After Thompson made two spectacular saves on DeBrincat following Eichel’s goal, the third time was a charm for Chicago’s assistant captain. DeBrincat skated to the bottom of the right circle and found a sliver of space above Thompson’s blocker to put Chicago back on top.

The lead lasted for 47 seconds, as Pietrangelo’s ripper from the blue line found its way through traffic and into the net, once again tying the game and sending the crowd into a frenzy.