The Florida Panthers are expected to be busy before the March 21 trade deadline as recently their management team confirmed ‘everything is on the table’. This includes moving former first-rounder Owen Tippett, who is a 22-year-old forward with a tremendously high offensive ceiling. There will be tons of interest, lets take a look at three potential destinations for the Panthers youngster:

The Coyotes would love to get their hands on Tippett and provide themselves with a potential sniper to build around. The Panthers are likely looking for more depth on defense and goaltending depth so perhaps a move here including Coyotes defenseman Jakob Chychrun and goaltender Scott Wedgewood. If Florida is going to give up on their one time prized prospect it will only be for game-changing players who move the needle and Chychrun certainly does that for them. 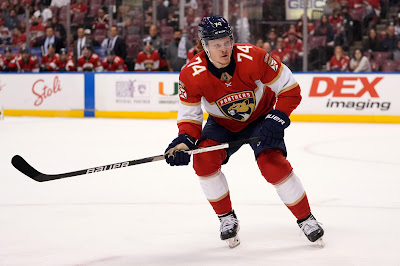 The Avalanche have been busy talking to other teams about right-handed forwards who can play on their second-line and there could be a potential fit here. Tippett has an all-world shot and with some more ice-time than the 12:39 he’s averaging this season and you’d likely see some more production out of the Peterborough, Ontario native. So far this season he’s recorded 14 points in 41 games and has spent two games down in the minors where he recorded four points. The Avalanche can easily make room for Tippett under the salary cap as he’s still on his entry-level, meanwhile they also have some solid depth on their blue line which could accommodate the Panthers needs.

Josh Manson is a prized defenseman a ton of teams are calling about and that includes the Panthers. Tippett would certainly be enough to start a serious conversation with the Ducks about a move here as they are looking for young forwards to help out Trevor Zegras. Tippett’s an avid golfer and it wouldn’t hurt his feelings at all going from Florida to California. Keep an eye on these two teams because they both have cap space and general managers who are trying to improve their hockey club at all costs.
Last summer when the Panthers traded for Sam Reinhart I asked Tippett if he thought he was going the other way and he said no as the message had been pretty clear from management. Life comes at you fast kids.
Photo credit: © Jasen Vinlove-USA TODAY Sports/Brad Mills-USA TODAY Sports